Research “Web Development Market and Careers in the USA” 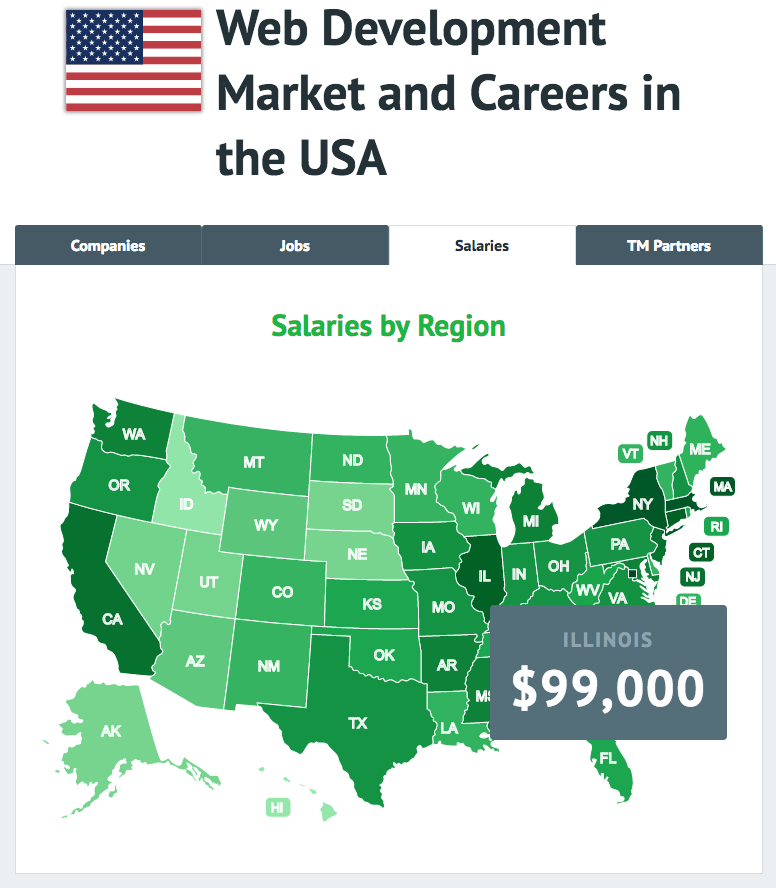 After collecting and analyzing the data on web development market, the analysts of TemplateMonster have obtained following results:
• The influence of regional factors on the salary and employment;
• Top Web Developers Jobs and their salary range;
• Top 5 states and Metro Areas with the highest levels of salaries;
• Experience and skills that affect salary rates;
• Key Requirements for Web Developer.

Essentials
According to the findings of TemplateMonster’s analysts, there were 249,097 companies and 121,020 people working in the web development market across the United States as web developers, web designers, and related professionals. An average web developer is a male working full-time with a mean annual salary of $68,670 and a bachelor’s degree in information technologies field. Gender-wise, there are 82% of male web developers versus 12% of females. While 83% of developers work for companies, 17% are self-employed.

The geographic location has a huge impact on wage rates for web developers: the highest-paid positions are found in metropolitan areas, namely, San Jose, California; San Francisco; and Seattle.

Salary
TemplateMonster reports that average salary ranges for web developers in the USA have increased by up to 13,59% during the last two years. Last year, the overall annual income of Web Developers fell within the range of $73,500 – $122,000 depending on individual performance. 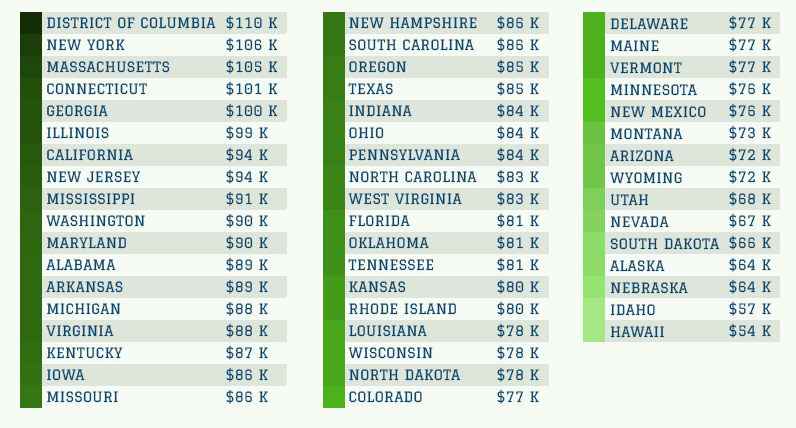 Experience That Affect Web Developer Salaries
Analysts found out that relevant experience and working time in the web development field have a direct impact on salaries and compensation packages. Newcomers to this profession can expect to earn an average of $50,000 (not counting bonuses and perks). Experienced specialists who worked smart from 5 to 9 years can increase their income (by 14%) up to $61,800. After 10+ years, web developers could increase their salary by 30% and earn an average of $72,300 annually. Professionals with 15–20 years of experience make $80,000–$81,000.

Employment and Job Outlook
Today, companies and organizations have come to rely on online as a communication channel with their customers, partners, and employees. Therefore, the employment of web developers in the USA is expected to grow much faster than the average for all occupations. As of 2015, there were 249,097 companies that have been proactively recruiting web developers. 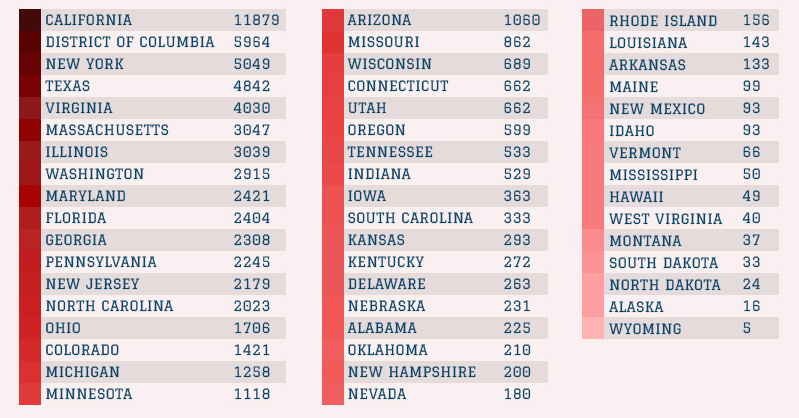 Amount of vacancies by state

Job Prospects and Skills
Job opportunities for web developers are promising. Those with knowledge of multiple programming languages and digital multimedia tools have better chances to land the job they want.

In some states, web developers may want to move from one state to another with higher wages and lower rental prices, decreasing employment growth in the particular state.

Key Requirements for Web Developers
For most candidates, key requirements for landing work as a web developer are quite simple: digital portfolio with live web pages, websites or applications, and a set of programming, web design, and database management skills.

Fundamental programming skills include (for front-end developers) CSS3, HTML5, JavaScript, jQuery, Angular, and Backbone as well as hot programming skills for back-end web developers are PHP, Python, Django, Ruby on Rails, XML, and SQL. Multimedia design and scripting skills in popular platforms like Adobe Flash and Microsoft Silverlight are also marketable so far but their popularity is fading.

Education Level
Almost half (43%) of all web developers working in the field have bachelor’s degree while 20% have an associate degree, and 13% have the post-graduate certificate.

Work Environments
Computer systems design and information service industries employ the largest share of Web developers. An average web development company is usually a small Web Shop or Studio with an average cost of a project of about $2500 and 5 people involved. Besides, many web developers can work alone or remotely in teams, and many of them are self-employed

Looking for news? Need an expert opinion? We’re always happy to chat and help with your story. E-mail us to talk with one of our execs or employees.
E-mail: press@templatemonster.com